On the Beaches of Normandy 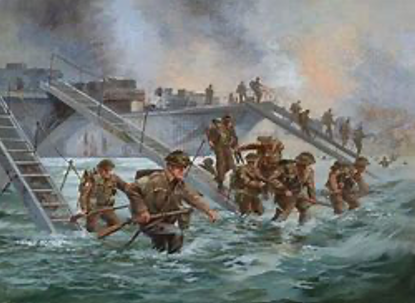 During World War II, the Allies carried out amphibious assault landings on June 6, 1944. In the ensuing battle, thousands of young men and women lost their lives. Not far from the landing site, there is now a very large well-groomed cemetery with a beautiful chapel at one end. In the chapel one finds an altar of black and gold Pyrenees marble engraved with the inscription: I Give unto Them Eternal Life and They Shall Never Perish.

Walking through the cemetery is a heart-rending experience. Tears come easily. Here are generals buried beside privates, blacks beside whites, Jews beside Christians, Americans from 49 states plus the District of Columbia and Guam. Each paid the ultimate sacrifice. All died for freedom.

All died on our behalf.

As we prepare for Memorial Day, we might well ask ourselves: “Am I worth their sacrifice? Am I grateful to them? What might I be willing to give to bring peace and freedom to the world?”